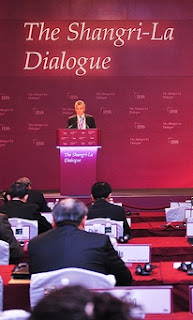 "The two leaders reaffirmed the importance of deepening ties in support of the U.S.-Indonesia Comprehensive Partnership, an initiative of Presidents Barack Obama and Susilo Bambang Yudhoyono, calling for closer ties between our two governments and societies,” Little said in a statement summarizing the meeting. “They reviewed progress made in recent years to increase exercises and training, as well as regular defense policy dialogues.”

The secretary and Yusgiantoro also discussed American support for Indonesia's military modernization, including through the U.S. Foreign Military Sales Program, Little said, and Hagel underscored the importance of human rights accountability for sustaining the momentum in the U.S.-Indonesian defense relationship.

Hagel said he looks forward to hosting Yusgiantoro in Washington as soon as his schedule allows, Little added.