This is PacificSentinel’s 30000th and last post; Seven months ago I was promoted at work and have much less time on my hands, between work and this blog I’ve only had Sundays to do other things, and that’s just not enough time, so unfortunately, after a bit more than Six and a half years, the blog has to end.

This is a partial list of the Websites I’ve been using, just in case you want to continue reading them:

There are others, Defence Industry and Government websites, but there are far to many of those to list, the only other site of note is the Australian Think Tank ASPI whose "The Strategist" blog has been rather useful over the years.

Thanks for coming here all these years. 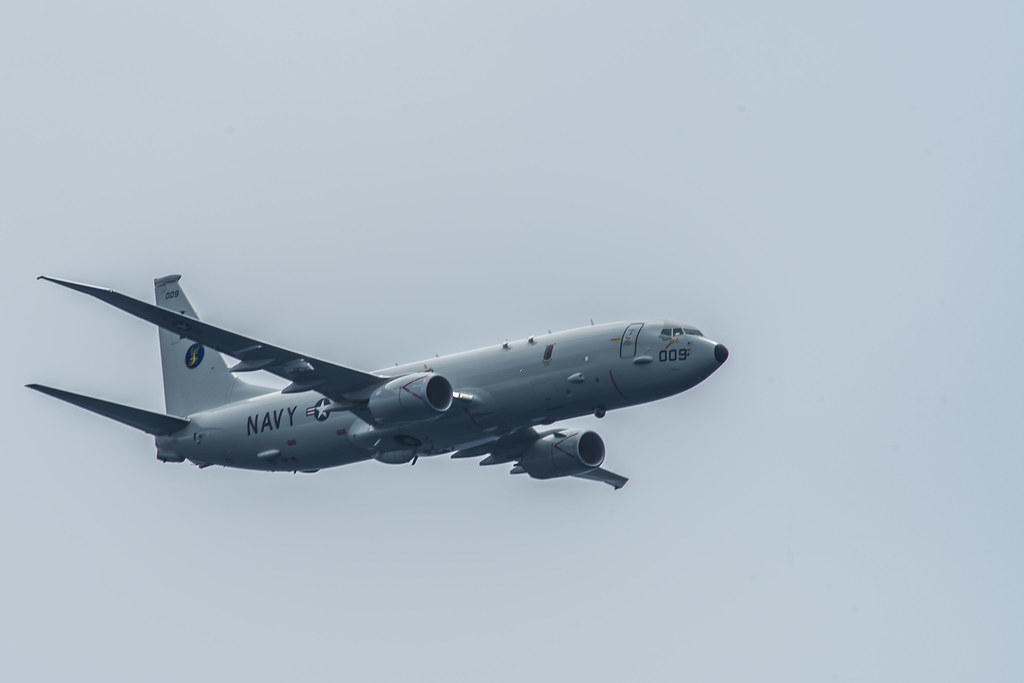 This is a part of a rotational deployment of forces, and the first time a P-8 detachment will be deployed to Oahu. Previously, these maritime security missions were flown by P-3C Orion aircraft.

This is VP-4's first deployment flying the P-8A Poseidon. The P-8A, a militarized version of the Boeing 737, is the most advanced long-range maritime patrol aircraft in the world. It is a capable of broad-area, maritime and littoral anti-submarine and anti-surface warfare, and ISR operations. The aircraft brings the latest avionics and onboard systems to the maritime patrol and intelligence, surveillance and reconnaissance (ISR) mission, making it the most advanced anti-submarine and anti-surface warfare aircraft in the world.

VP-4, which is based at Whidbey Island in Washington, has a long history in Hawaii, dating back to 1928 when it was first established in Hawaii. The squadron operated here during the Vietnam War and the Cold War. In recent years, VP-4 deployed to the U.S. 5th Fleet area of operations in Iraq and Afghanistan and U.S. 6th Fleet area of operations including Italy, Greece and Spain, to name a few.

VP-4 departed Oahu for the last time as a Hawaii squadron in March 2016. While on deployment, VP-4 executed a permanent duty station change to Whidbey Island.

Turns out Kim Jong-un wasn't joking around when he said the DPRK would "tame [US President Donald Trump] with fire" last week.

According to Rodong Sinmun, a North Korean outlet, an estimated 4.7 million students and workers indicated they would volunteer to join or re-enlist in the Korean People's Army in the hopes of countering US forces.

Included in the estimates are some 1.22 million women, the outlet reported Thursday.

For the first time ever, a Pakistani fighter pilot has flown a Chinese warplane during joint combat exercises between the two Asian nations. The exercises, which lasted through most of September, took place in Xinjiang, the westernmost province of China that borders Pakistan.

The Shaheen-VI exercises, the latest in a series of annual joint drills between the Pakistan Air Force (PAF) and the People's Liberation Army Air Force (PLAAF) that started in 2011, happened this year between September 5 and 25. They included many firsts, according to Chinese military sources, such as live-fire target practice, night warfare, and close support operations.

But the biggest news from the exercise came when Air Vice Marshal Haseeb Paracha, head of PAF's Southern Air Command, climbed into a Chinese J-11B fighter and flew a sortie as part of the exercises. This was the first time in history that a PAF pilot flew a PLAAF plane, a symbolic gesture of the tight bonds between Beijing and Islamabad.

The former Prime Minister of Thailand, Yingluck Shinawatra, was jailed in absentia for five years by a court on Wednesday, September 27. Now, like her brother Thaksin, she has gone into exile, leaving a country which is deeply divided.

The former prime minister of Thailand, Yingluck Shinawatra, has been given a five-year jail sentence for her role in an allegedly corrupt scheme involving subsidies to rice farmers. Yingluck and her brother Thaksin were politicians who polarized Thailand, engendering adoration among their supporters and loathing among their opponents.

UNITED NATIONS — U.N. Secretary-General Antonio Guterres called Thursday for "swift action" to halt the deteriorating situation in Myanmar's northern Rakhine State, where a half million mostly Rohingya Muslims have fled to neighboring Bangladesh in the past month.

"The situation has spiraled into the world’s fastest developing refugee emergency; a humanitarian and human rights nightmare," Guterres told an open meeting of the U.N. Security Council.

The council has privately discussed the situation three times in the past month, but Thursday’s session was the first time since 2009 that it has publicly discussed Myanmar.

Guterres called for an end to the military’s operations; unhindered aid access; and the safe and voluntary return of refugees to their areas of origin.

"There seems to be a deeply disturbing pattern to the violence and ensuing large movements of an ethnic group from their homes," Guterres said.

Guterres and his human rights commissioner have both expressed concerns that what is happening in Rakhine State is ethnic cleansing.

The secretary-general said the core problem is the prolonged statelessness of the Rohingya and its associated discrimination. "The Muslims of Rakhine State should be granted nationality," Guterres said.

The Rohingya are one of many ethnic minorities in the Buddhist-majority nation. They are considered to be economic migrants from Bangladesh and have been denied citizenship, even though most can show that their families have been in the country for generations.
Read more »
Posted by PacificSentinel at 1:29 PM
Email ThisBlogThis!Share to TwitterShare to FacebookShare to Pinterest
Labels: ASEAN, Bangladesh, China, Crimes Against Humanity, Human Rights, Massacre/Genocide/War Crimes, Myanmar/Burma, Organization of Islamic Cooperation (OIC), Refugees, Rohingya (Burma), UN Security Council, USA 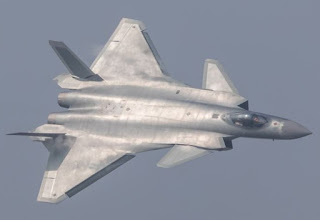 Wu Qian, a spokesperson for the country’s Ministry of National Defense, also said in a media conference on Thursday that flight tests are being conducted as scheduled. The type is currently in low rate production for China’s People’s Liberation Army Air Force, or PLAAF, with at least six examples known to be undergoing operational testing since late 2016 with the service’s 176th Air Brigade at Dingxin Airbase in China’s Gansu Province.

The J-20 is classified by the PLAAF as a fourth-generation — broadly equivalent to fifth-generation in the West — medium- and long-range fighter jet with stealthy characteristics, although these are mainly confined to the frontal aspect of the design.

News Story: Can North Korea shoot down a US military aircraft?

Ri Yong Ho told reporters that his country “reserves the right to shoot down United States strategic bombers even when they’re not yet inside the airspace border of our country.” His comments come in the wake of a war of words between both countries over North Korea’s ballistic missile and nuclear weapons program.

The conference came after a Sept. 23 flight over international waters “east of North Korea” by U.S. Air Force B-1B Lancer bombers, escorted by F-15C jets, that U.S. Pacific Command said was the “farthest north of the Demilitarized Zone (DMZ) any U.S. fighter or bomber aircraft have flown off North Korea’s coast in the 21st century.”

According to South Korean media citing sources from the country’s intelligence services, the route of the B-1Bs took them approximately 90 miles from the North Korean port city of Sinpo and the Punggye-ri nuclear test site at its closest point but beyond the range of known long-range, ground-based air defense systems. The bombers’ flight path was also well beyond the North’s self-declared, 50-mile military boundary zone, which is not recognized by the United States.

At these distances, it would be a significant challenge for the North to effectively target any U.S. overflights. Like much of its conventional forces, North Korea’s air defense network is large in quantity but of questionable quality due to obsolescence, as the country is barred from importing military capabilities due to a United Nations arms embargo.

SEOUL, Sept. 28 (Xinhua) -- South Korea's defense ministry said on Thursday that the country was closely consulting with the United States on a rotational deployment of U.S. strategic military assets near the Korean Peninsula.

Lee Jin-woo, deputy spokesman of the defense ministry, told a regular press briefing that the two allies agreed to expand the rotational deployment of U.S. strategic assets in and near South Korea during a meeting last week in New York between South Korean President Moon Jae-in and U.S. President Donald Trump.

Moon said in a speech to celebrate the 69th anniversary of Armed Forces Day that the government aimed to regain the wartime command of South Korean forces early from Washington, and that the transfer will make the military's capability leap forward.

The president said the DPRK will be scared of the South Korean military when it has the wartime control of its own troops.

South Korea handed over its operational command to the U.S. forces after the three-year Korean War broke out in 1950. The country won back its peacetime operational control in 1994.