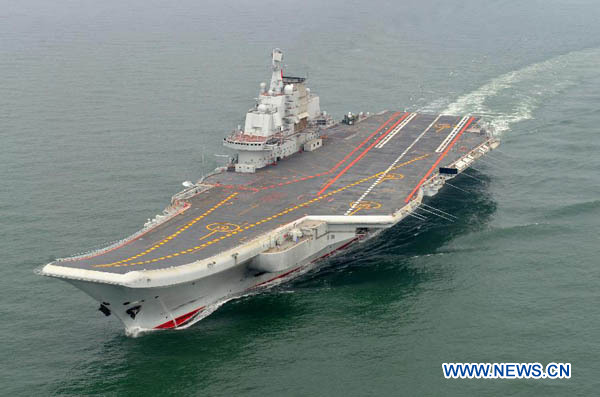 According to public reports (PDF), China is building two aircraft carriers, with plans to increase that to four, according to one report, and possibly a new class of helicopter carrier for amphibious assault. For many in China, this has been a necessary evolution for a country of such wealth and international power. For the government, it is part of a techno-nationalist campaign designed to show that the country is arriving at the highest level of international power. The idea is that China can do anything the other great powers do. It can land jet aircraft on a carrier, it can put a rover on the moon, and it can put a man in space. This is the decade of impressive and inspiring achievement we have seen from China.
Yet the challenge China faces is that it is copying innovations first undertaken more than a few decades earlier (China was four decades late for manned space travel and six decades late for a jet aircraft landing on an aircraft carrier). When China puts a person on the moon later this decade it will be five decades after the United States did so. In those four to six decades, the innovation of the United States and other countries did not stand still. So we should not automatically assume that mere replication of such technological milestones is a good idea for China.
There has been some debate in the pages of The Diplomat about the expansive ambitions of China in the naval domain and about the contemporary value of aircraft carriers in naval forces in general. The view I identify most with is that from Harry Kazianis, “Why to Ignore China’s Aircraft Carriers” (January 28, 2914). He said: “There is a lot of Chinese hardware that could challenge U.S. primacy in the Pacific — but carriers are not one of them.” But I don’t even agree that Chinese hardware can challenge U.S. primacy. It takes a lot more than technology. It is about intent and allies, among many factors to consider. I don’t believe that Chinese leaders have it in their heads or in their budgets to challenge U.S. naval primacy in the Pacific.
I also take issue with the speculation about China building naval bases in the Indian Ocean. It is possible at some point that they might do so, but it is not likely to be in the leaders’ plans for the foreseeable future. Why do they need foreign naval bases?