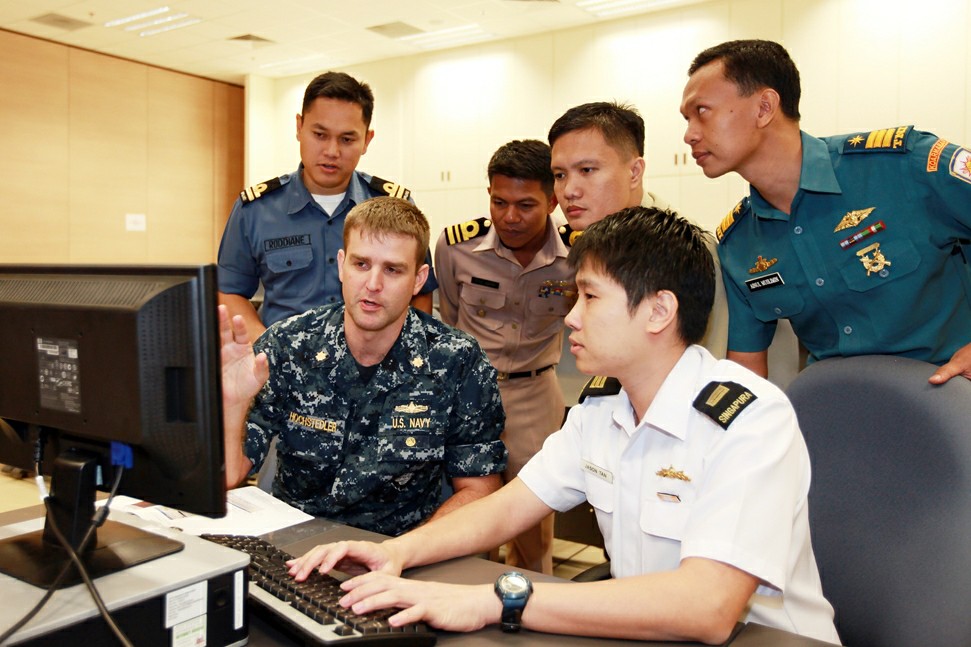 Focused on regional cooperation to address shared maritime security challenges like piracy, smuggling and other illicit activities at sea, SEACAT brings together liaison officers from Brunei, Indonesia, Malaysia, the Philippines, Singapore, Thailand, and the United States to collaborate and coordinate practical responses to a number of realistic scenarios.

"As maritime nations that depend on the free flow of commerce at sea, we share an interest in addressing these challenges and recognize that none of us has enough resources to do it alone," said Rear Adm. Charlie Williams, commander of the U.S. 7th Fleet's Task Force 73 and executive agent for SEACAT, who delivered opening remarks at the MOEC.


During the five-day command post exercise (CPX), liaison officers will receive simulated reports of suspect vessels in the Straits of Singapore and Malacca, the Andaman Sea or the South China Sea. After sharing information from all available sources, such as Singapore's Information Fusion Center (IFC), Malaysia's International Maritime Bureau (IMB), or the Philippines' Coast Watch System, the LNOs will develop and implement response plans during a concurrent field training exercise (FTX). Based on the situation, aircraft and ships from participating navies will investigate and conduct on scene boardings as necessary.

"We're all mariners here and I'm pleased that organizations like Malaysia's MMEA are part of the mix this year," said Williams. "Coordination between navies, coast guards and marine police is a big part of getting after maritime security challenges, especially those that overlap with international and territorial waters."

Several staff members from the forward deployed Destroyer Squadron (DESRON) 7 are also on hand to participate as U.S. LNOs and to run the CPX scenario.

"For the second year in a row, DESRON 7 is looking forward to participating in this year's SEACAT exercise," said Capt. Fred Kacher, DESRON 7 commodore. "Exercises like this help to strengthen partnerships so we are ready to respond as one team to challenges whenever they arise in this incredibly important maritime region."