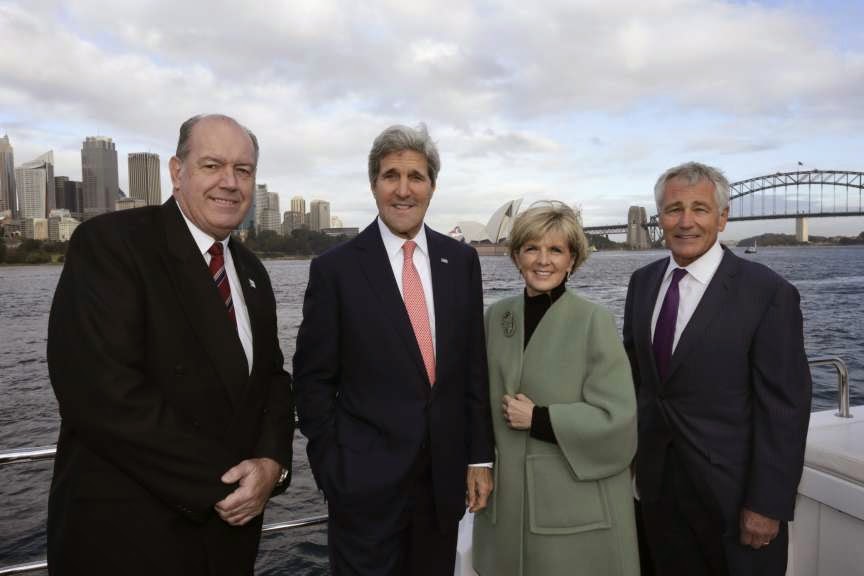 Australia is committed to our Alliance relationship with the US, which remains the cornerstone of Australia’s strategic and security architecture. After more than 60 years, our Alliance remains as strong and relevant as ever.

During AUSMIN talks on Monday and Tuesday with the Minister for Foreign Affairs, Julie Bishop, and the US Secretary of State, John Kerry, we discussed the strength of the Australia-US Alliance relationship and noted the significant progress made since last year’s meeting.
We signed a legally-binding agreement to facilitate the full implementation of the US force posture initiatives in northern Australia.

The Force Posture Agreement will provide a robust policy, legal and financial framework for the force posture initiatives. This important new agreement will facilitate the full implementation of the US Marine Corps and US Air Force initiatives in northern Australia that were agreed between our two countries in 2011.

The force posture initiatives are an expression of Australia’s support for a strong US presence in the region and their implementation was a central topic of discussions at AUSMIN.

During AUSMIN we also agreed to several new initiatives that will strengthen and enhance our security and defence cooperation.

We welcomed Japan’s efforts to make a greater contribution to international peace and stability. We agreed to enhance trilateral security and defence cooperation with Japan, including through the Trilateral Strategic Dialogue and further developing existing trilateral exercises.

In recognition of the growing threat posed by ballistic missile proliferation, we examined options for potential Australian contributions to regional Ballistic Missile Defence. I also accepted Secretary Hagel’s offer to send a team of experts to Australia to assess potential Australian contributions to the regional Ballistic Missile Defence capability.

In addition, we discussed our shared commitment to fostering global security and stability. We reaffirmed our commitment to completing a full international investigation into the origins of the attack against Malaysian Airlines flight MH17 in the Ukraine.

We also acknowledged the important contributions our defence personnel have made together to global security, including in Afghanistan. We agreed on the importance of maintaining the hard-won interoperability gains from over a decade of operations, particularly for our Special Forces.

We also discussed naval cooperation and asked our respective officials to develop practical options to enhance training and exercising in Australia and the region.

On Monday, Secretary Hagel and I conducted a bilateral meeting and participated in a roundtable event with leading Australian strategic commentators.

We also conducted a wreath laying in Hyde Park, in recognition of our shared sacrifices in every major war since World War I.

The wreath laying was attended by the Secretary of the Department of Defence, Mr Dennis Richardson, the Vice Chief of Defence Force, Vice Admiral Griggs, and Commander of US Pacific Command, Admiral Locklear.
Today I am travelling to Darwin to meet with Australian soldiers and members of the US Marine Corps rotational force at Robertson Barracks.

Robertson Barracks is home to the US Marine Corps rotational presence in northern Australia.

This year’s Marine rotation involves around 1150 US Marines, up from 250 Marines in 2013. The rotation also includes four helicopters and a range of vehicles and equipment. Larger rotations better position both nations to work with regional partners on common contingencies such as humanitarian assistance and disaster relief.

I thank Secretary Hagel for his visit to Australia, and for our robust and productive conversations during his time here.

A copy of the Final AUSMIN 2014 Communiqué (PDF) is available.