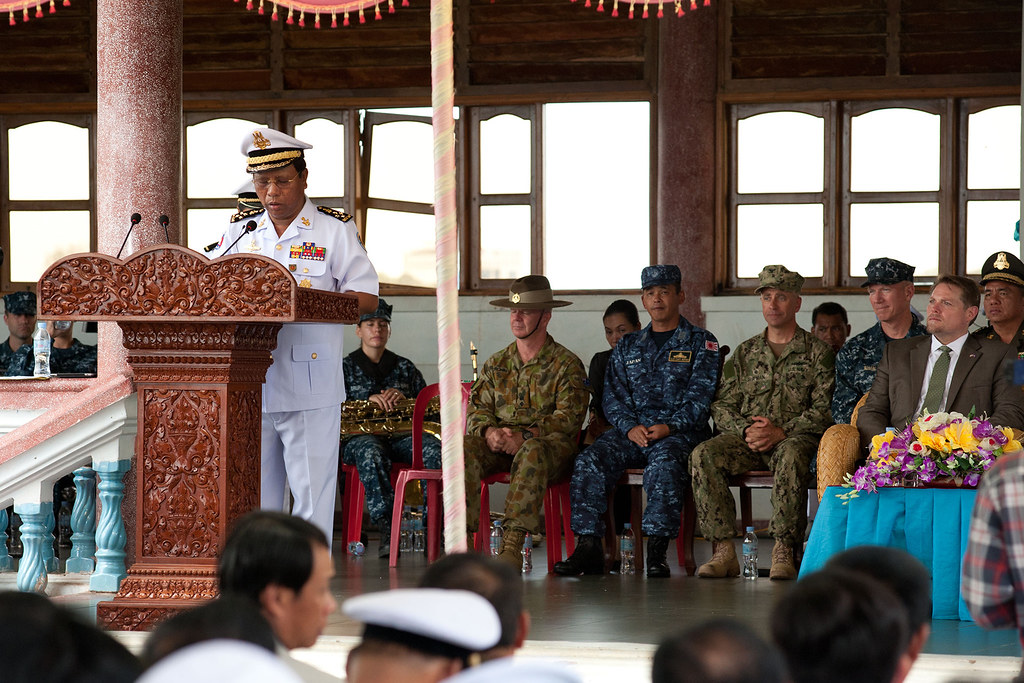 By MC2 Karolina A. Oseguera

SIHANOUKVILLE, Cambodia - Pacific Partnership 2014 in Cambodia came to a close June 27 with a ceremony held on the pier alongside the Japan Maritime Self-Defense Force ship JS Kunisaki (LST 4003).

“It has been a privilege to be here in Cambodia,” said Rear Adm. Russell Allen, deputy commander of U.S. 7th Fleet. “This has been a wonderful experience for learning that has brought forth so many great accomplishments."


Over the past two weeks, the Pacific Partnership multinational medical team worked next to their Royal Cambodian Armed Forces (RCAF) counterparts to conduct professional exchanges and to provide medical treatment in Sihanoukville, Phnom Penh, and Takeo, as well as veterinary services on Koh Rong Island and in the Sihanoukville region.

“The Seabees from Naval Mobile Construction Battalion 1 have partnered with the Royal Cambodian Armed Forces and the Japanese Forces to build three great facilities to care for their patients,” said Allen.

Pacific Partnership provided care to more than 4,000 Cambodians in need, including many who would not normally have access to medical services. The medical practitioners exchanged ideas and knowledge on crucial medical issues facing Cambodia, including a cardiology seminar in Phnom Penh attended by more than 150 medical personnel from throughout Cambodia.

“The bonds our countries share are invaluable and we are honored to work alongside our Cambodian partners,” said Allen. “I am incredibly proud of every person who has contributed to this mission. Your accomplishments stand as a testament to the priceless partnerships that make our countries brave.”

Pacific Partnership is in its ninth iteration and is the largest annual multilateral humanitarian assistance and disaster relief preparedness mission conducted in the Asia-Pacific region.