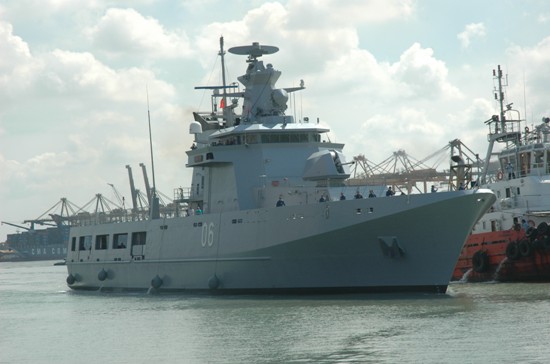 The deployment is led by Major (L) Willie bin Padan, Commanding Officer of KDB DARULEHSAN with a total crew of 69 personnel including attachments.


To bless the ceremony, a Doa Selamat was recited and followed by Azan on the forecastle of KDB DARULEHSAN by Captain Ariffin bin Amit, Deputy Head of Religious Department, RBAF.

KDB DARULEHSAN will join 9 other countries involving 10 warships participating in the exercise for two days at sea (23rd to 24th April 2014). The sea-phase includes a range of exercises; Joint Anti-Hijacking, Search and Rescue (SAR) and small arms firing. In conjunction with the celebration to mark the 65th Anniversary of PLA-Navy, honour is also being given for the participating ships to join the PLA-Navy IFR which will takes place during the sea-phase.

The MMEx and IFR will be conducted amidst of the event of Western Pacific Naval Symposium 2014 (WPNS 2014) which will also takes place in Qingdao, China. WPNS is a forum where leaders of Pacific Ocean region navies could meet biennially to discuss cooperative initiatives to address regional and global maritime issues. WPNS 2014 will mainly be attended by the Chief Navies of WPNS members including First Admiral Dato Seri Pahlawan Abdul Aziz bin Haji Mohd Tamit, Commander of Royal Brunei Navy.

The participation of Royal Brunei Navy ship in the exercise will promote defence diplomacy with other participating navies especially the host navy. Promoting good defence diplomacy between the participating navies is important to enhance understanding, consensus, mutual trust as well as friendship. On the other hand, it is always a good opportunity for the deployed personnel to gain skills and experience whilst learning and understanding other cultures.

On the return journey route, KDB DARULEHSAN is scheduled to make a 4-day Goodwill visit at Haiphong, Vietnam to promote defence diplomacy and friendship before heading back and arrive in Brunei Darussalam on 5th May 2014.