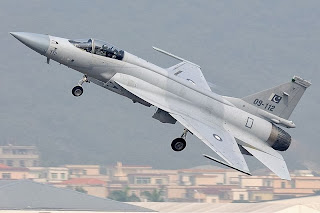 The Block-II variant of the JF-17s entered production recently, with more advanced weapon systems and avionics.
According to reports by DefenseNews and DefenseTalk, Pakistan launched production of the Block-II JF-17 combat aircraft at the Pakistan Aeronautical Complex near Islamabad. The Diplomat reported earlier this year that Pakistan expected to begin exporting the JF-17 in 2014; the beginning of production last week is set to keep it on track to meet that deadline.

Pakistani Prime Minister Nawaz Sharif visited the Pakistan Aeronautical Complex last week for “briefings on the exports of the Pakistan Air Force’s aircraft, the JF-17 Thunder,” according to a report by The Tribune. The event was intended to inaugurate the beginning of the production of the Block-II JF-17s and was attended by Chinese delegates and the Pakistan air force. Sharif said the JF-17 project would “expand the friendship between China and Pakistan.”