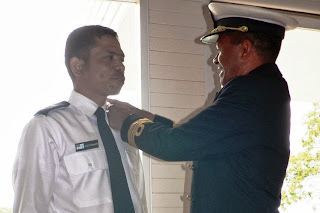 The latest New Entry Officers’ Course (NEOC) at HMAS Creswell has a very special trainee, one paving the way for his nation and Navy.

Jacinto Do Nascimento is the first Timor-Leste Navy officer to attend training at the Royal Australian Naval College in an agreement between the navies set to continue into the future.

As part of the ADF Defence Cooperation Program, the undertaking proposes to train up to two Timor-Leste officers per year, making the Royal Australian Navy the training partner of choice for the fledgling Timor-Leste Navy.


Highlighting the importance of Jacinto’s training, Commander Higineo Neves, Chief of Naval Component Timor-Leste took a break from events associated with the International Fleet Review, to travel to Creswell to congratulate one of his own officers.

Commander Neves officially promoted Midshipman Do Nascimento to Sub-Lieutenant in front of his NEOC 49 peers to resounding applause.

Lieutenant Commander Mark Burton, Senior Naval Advisor to Timor-Leste, captured the significance of the ceremony, “Since Timor-Leste independence was granted in 2002, building a naval presence has been vital.”

“The Royal Australian Navy is committed to assisting our colleagues in Timor-Leste to achieve this aim, as one of their closest neighbours in the region,” he said.

“It is an emotional day to watch this commitment come to fruition here at the Naval College.”

As part of his visit to Creswell, Commander Neves presented the establishment’s Executive Officer, Commander Letitia van Stralen, and Training Commander, Commander Patrick O’Brien with ‘tais’—scarves symbolising friendship.  Creswell returned the gesture with presentation of a crest to signify the ongoing partnership between the navies.