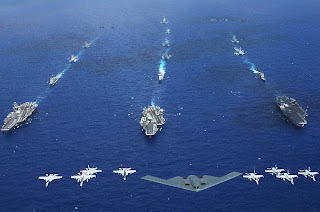 PENTAGON: In intellectual terms, Air-Sea Battle is the biggest of the military’s big ideas for its post-Afghanistan future. But what is it, really? It’s a constantly evolving concept for high-tech, high-intensity conflict that touches on everything from cyberwar to nuclear escalation to the rise of China. In practical terms, however, the beating heart of AirSea Battle is eleven overworked officers working in windowless Pentagon meeting rooms, and the issues they can’t get to are at least as important as the ones they can.

“It’s like being a start-up inside a great, big, rigid corporation,” one Air-Sea Battle representative told me in an exclusive briefing last month. The Air-Sea Battle Office (ASBO) has just 17 staff: those eleven uniformed officers, drawn from all four services, plus six civilian contractors. None of them ranks higher than colonel or Navy captain. Even these personnel are technically “on loan,” seconded from other organizations and paid for out of other budgets. But those 17 people sit at the hub of a sprawling network of formal liaisons and informal contacts across the four armed services and the joint combatant commands.

“Air-Sea Battle has left the building,” said a second officer at the briefing. “We’ve reached the grass roots, and we’re getting ideas from the grass roots.”

So the good news is that the Air-Sea Battle Office isn’t just another big Pentagon bureaucracy, let alone the anti-China cabal it’s sometimes of accused of being (PDF). Instead, in essence, it is an effort to develop compatible technologies and tactics across all four services for a new kind of conflict: not the Army and Marine-led land war against low-tech guerrillas we have seen since 9/11, but an Air Force and Navy-led campaign against “anti-access/area denial” forces that could fry our networks, jam GPS, and hit our planes, ships, bases, and even satellites with long-range missiles. China is the worst case scenario here, but not the only one.