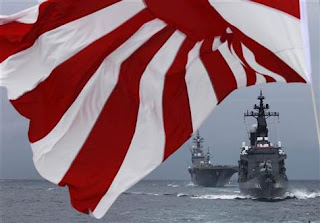 The Japanese defense minister says the Chinese “have attempted to change the status quo by force in ways incompatible with the existing order of international law and in ways that could be seen as provocative.”

Japan and China have a long-standing dispute over small islands in the East China Sea controlled by Tokyo. Tension has escalated since the central Japanese government, last September, purchased the unoccupied islands (known as Senkaku in Japanese and Daoiyu in Chinese) from their private Japanese owner.

Within hours of the issuance of the Japanese white paper, the foreign ministry spokesperson in Beijing responded by accusing Tokyo of making unfounded accusations against China.

Hua Chunying says China's maritime activities are carried out according to international law, the country is on the path of peaceful development and always stands for resolving territorial disputes through dialogue. But, she says, Japan has recently “played up the China threat, causing tensions and confrontation. And the international community cannot help but worry over where Japan is heading.”


The white paper also suggests Japanese forces should have the capability to attack enemy bases as an effective deterrent against ballistic missile threats.

That is in response to North Korea's nuclear and missile development programs, as indicated by defense minister Onodera.

However, South Korea - also a potential target of the rival North's forces - is joining China in criticizing the Japanese document. That is because the annual paper - as it has since 2005 - asserts a territorial claim over a rocky outcrop, covering less than one-fifth of a square kilometer, held by South Korea (known as Dokdo in Korean and Takeshima in Japanese).

Colonel Wi says if Japan refuses to withdraw its territorial claim there can be no expectations of defense exchanges or military cooperation between the two neighbors.

This is the first such report published since Shinzo Abe returned as Japan's prime minister. He has expressed a desire to alter his country's pacifist Constitution, drafted by U.S. military occupation forces shortly after Japan's defeat in 1945.

That makes some of Japan's neighbors uneasy, believing it could lead to a revival of Japanese militarism. There is a widespread perception in the region that Japan has never sufficiently expressed remorse for its brutal colonization of the Far East and much of the Asian continent before and during the Pacific War.

Japan, for the first time in eleven years, this year increased its defense budget and is drafting a new overall defense plan. It is also increasing the scope of defense drills with its primary ally, the United States, which maintains more than a dozen military bases and tens of thousands of uniformed personnel in Japan.