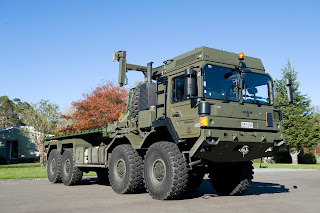 In a $135 million project, the government is purchasing Rheinmetall- MAN military vehicles to replace the old NZDF Unimog and heavier Mercedes trucks.

“The new NZDF medium and heavy trucks will carry more people and equipment, and will be fitted with armour and weapons to protect the crew, allowing them to function effectively in modern military environments,” said Dr Coleman.

“The same military vehicles are being purchased by the United Kingdom and we have bought them at a great price by purchasing off the same production line as the Brits, achieving an economy of scale.”

“The total cost for the trucks from the production line is $113 million.  The remaining balance of the project costs includes armour protection kits; weapons mounts; personnel modules and a range of specialised military equipment,” he said.


“The arrival of all the new trucks by the end of 2014 will mean the NZDF can begin working up to a future operational capability which will be a huge step forward in technology and protection from the current fleet.”

“The government’s defence policy is all about investment in the front line and these new trucks are a great example of that,” said Dr Coleman.

“These new trucks are part of an ongoing programme of equipment upgrades, including modernisation of the ANZAC frigates,  replacement helicopters for the Navy, and getting our upgraded Orions and Hercules fully into service.”