News Story: Russian Navy Mistral LHDs to be based in the Far East ports of Vladivostok and Petropavlovsk 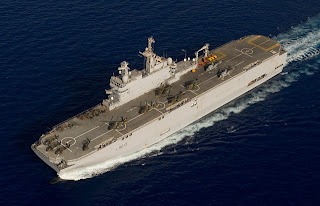 Russia will base its French-made Mistral-class amphibious assault ship in the Far East ports of Vladivostok and Petropavlovsk-Kamchatsky when they enter service, a senior Defense Ministry official said in an interview. Russia signed a 1.2-billion euro deal with a French shipyard in 2011 for two Mistral-class ships, the first of which is due for delivery in 2014 and the second in 2015.

“There are several options [for their location], but the choice fell on Vladivostok due to its existing transport infrastructure,” Roman Filimonov, head of the Defense Ministry’s construction department, told RIA Novosti.