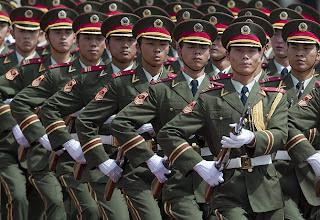 An annual white paper revealing the details of the 2.3 million strong PLA's actual number of troops in the army, navy and air force, omitted the number of personnel in its Strategic Command Division, the Second Artillery Force, which handled its nuclear and ballistic missiles.

Defence Ministry spokesman Yang Yujin who released the white paper on Diversified Employment of China's Armed Forces at a media briefing skirted the question about the PLA's strength estimated to be about 2.3 million.