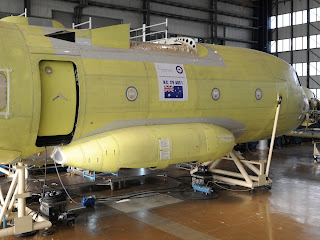 The fuselage of the first C-27J for the Royal Australian Air Force (RAAF) has arrived at the Alenia Aermacchi Turin plant for final assembly.

Manufactured at Alenia Aermacchi’s Capodichino Naples site, the fuselage, reached Turin both by truck (from Capodichino to the Port of Naples and from Genoa to Turin) and sea freight (from Naples to Genoa).

The Australian order for 10 aircraft was placed through the US Foreign Military Sales Joint Cargo Aircraft program last May.

The first C-27J will arrive in Australia in early 2015, and will be used for tactical airlift. They will replace the piston-engine Caribou, which were retired in 2009 after 45 years of service.

In the tactical transport role, the C-27J provides the best possible integration with the existing Australian Defence Force fleet. It will provide an airlift capability between the CH-47 Chinook and C-130J Hercules, as well as integrating with the much larger C-17A Globemaster.​